Austin Severns: The dangers of YIMBYism in Philadelphia

YIMBY will encourage mindless growth to the detriment of existing communities, building units for those who have already left Pennsylvania.
By Austin Severns

The term YIMBY (yes-in-my-backyard), describes a pro-housing-development movement that has grown in response to the NIMBY (not-in-my-backyard) movement. NIMBY proponents are strong believers in … well, there is no NIMBY movement. There are no visors, stickers, or pins for sale, and there are no reusable khaki grocery bags with “pro-NIMBY!” stitched to them. Instead, NIMBY is a bad-faith, pejorative term used to lump together anyone who, for any reason, objects to any form of development near their house. It reduces the complexity of a million community dilemmas, and the legitimate concerns of citizens into a catchphrase. Maybe worst of all, it forces grown adults into saying words like “NIMBY” and “YIMBY” with a straight face.

YIMBYism, similarly, isn’t a unified movement. It is a shotgun wedding between libertarians and social progressives who share the belief that more housing should be built but don’t agree on why. It’s a unique convergence between the people who view association with the Koch brothers as a political disqualifier, and the free market folks who are often literally bankrolled by the Koch brothers. Meanwhile, real estate developers laugh as they strut to the bank. Who is fooling who?

Libertarians are increasingly pro-YIMBY because of their pledge to the simple principles of supply and demand: if we build more housing, home prices and rent will reduce accordingly. This pairs with convictions to the principles of private property and individual liberty — “It’s my land, why should anyone be able to tell me what I can or cannot build on it?”

Urban social progressives, on the other hand, agree that development will lower housing costs but have different motivations for supporting it. They view YIMBYism as a means of correcting the design flaws of cities in ways that comport with other urban policy goals. (They also seem to be motivated by a general resentment for the rich, as seen below). 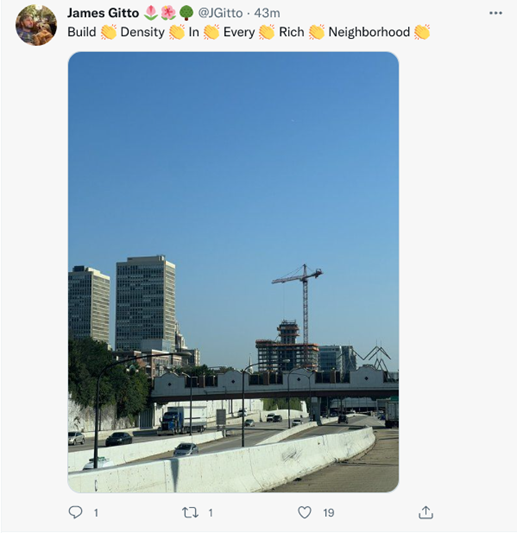 Chiefly, they believe density is a universal good; public transit supports dense cities, denser cities support public transit, and a good city is one without cars. Car-oriented cities (those with parking lots, parking garages, street parking, and wide roads) fail to support density, and around we go.

The love for development they share with libertarians is strictly incidental. If the market demanded the demolition of large, multi-family buildings in favor of low-density, single-family neighborhoods, the progressive YIMBY would turn around and support that neighborhood’s right to object. But when it comes to achieving density now, YIMBYs throw the baby out with the bathwater. By attacking those who seek to preserve their neighborhoods (via zoning or other means), they will make it harder for themselves to resist the free market down the line when it declares their ideal city obsolete.

Of course, no matter what people with master’s degrees insist, density is a preference with advantages and disadvantages. Some people prefer the suburbs; some prefer the country. Some people wish to own homes in quiet, small-scale neighborhoods within a city, like Queen Village or Graduate Hospital. Believe it or not, some people even prefer cars over bicycles! But YIMBYs reframe these preferences as luxurious and unnatural, only possible because of antiquated zoning laws.

Therefore, YIMBYism gives rise to a new version of the same old urban planner — “We change your city the way we want,” but this time under the guise of the free market.

YIMBYs are not ready to go to war with the concept of home ownership… Instead, they equate living in a neighborhood with owning a home in that neighborhood in order to classify the concerns that arise from home ownership as frivolous and upper-class.

This is why 5th Square, a transit-oriented Philadelphia political action committee whose mission is “to advance a vision for a more accessible, sustainable, equitable Philadelphia for all residents,” created Philly Yimby, an initiative that “will change the politics of housing by building coalitions of housing supporters to influence all levels of the land-use process…” 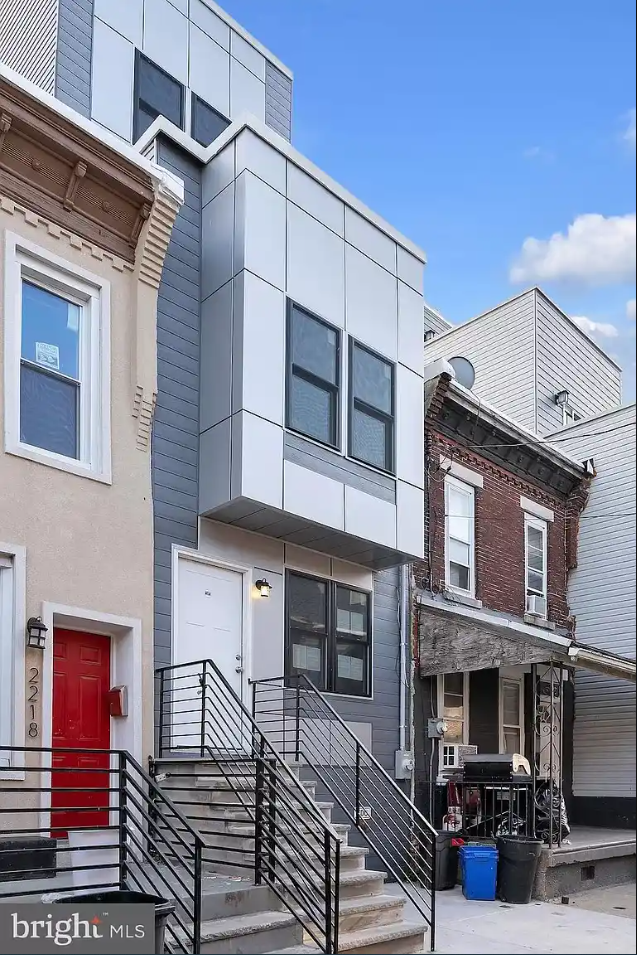 It’s easy to claim that by attempting to block new development, homeowners are only looking to artificially inflate the value of their homes. But obtaining a home with a mortgage carries with it a litany of concerns that are simply not as real to tenants (and social theorists). It’s not easy, but if a neighborhood becomes less safe, the schools get worse, or rent goes up, a tenant can relocate. A homeowner can’t. They have a heightened need, tied to the possibility of financial ruin, to preserve the neighborhood and to use any means possible to keep it safe, pleasant, and reasonably-priced.

At the end of the day, YIMBYs are not ready to go to war with the concept of home ownership, or reinvent the financial system that produces mortgages. Instead, they equate living in a neighborhood with owning a home in that neighborhood in order to classify the concerns that arise from home ownership as frivolous and upper-class.

Does Philadelphia even need a movement encouraging more development? It appears the real estate developers are doing just fine by themselves. According to WHYY, Philadelphia is on track to build a record number of apartments in 2022. According to Jon Geeting at the Philadelphia Citizen, only eight percent of the units permitted in 2021 were single-family. The city already offers a ten-year, 90% property tax abatement to encourage new construction. So what are the Philly Yimbys doing, other than cheering on the construction moguls?

Like a law of gravity, real estate developers will build. They will build like a child eating candy until they’re sick. This might be the solution for a city like San Francisco, with a serious housing shortage and average rent of $3,700. It’s not the solution for Philadelphia. It’s not clear that Philadelphia needs to grow at all. But if it does, it needs to grow in a way that doesn’t erase its charm and make it virtually indistinguishable from other similarly-sized cities.

Philly Voice recently reported that Philadelphia lost close to 30,000 residents in a fifteen-month period (almost half the amount the city gained over the previous ten-year period). The city has thousands of blocks of blight, a record-breaking murder rate, poor public schools, and a waste department that leaves trash strewn across the street, if it comes at all. Our city’s intellectual class needs to dedicate themselves to fixing these problems, and to stop pretending density will do it for them.

There is an unfortunate reality lurking beneath this debate: if the city’s rich neighborhoods have unwanted development thrust onto them, the residents of these neighborhoods will leave for the suburbs (or other states) and will take their taxable income with them. In order to strike a balance between growth and preservation, changes to the city should come up from the neighborhoods, not down from the city planners with the help of local radicals.

At best, YIMBYism distracts from the more pressing issues a city like Philadelphia faces. At its worst, YIMBYism will encourage mindless growth to the detriment of existing communities, building units for residents who have already left the city for places like Florida and Texas.

Update: The author would like to note that PhillyYimby.com and 5th Square’s “Philly Yimby” initiative are unrelated.

Austin Severns is a Temple University graduate and a law student at the University of Pennsylvania Carey School of Law. He is on Twitter @Austinseverns1.

2 thoughts on “Austin Severns: The dangers of YIMBYism in Philadelphia”