Chester County has fallen into the same pattern of hate-filled behavior as is happening across the country.
By Beth Ann Rosica

Chester County has fallen into the same pattern of behavior as is happening across the country. Those who accuse others of hate-filled words and actions are actually the ones perpetuating the behavior.

Most homes that display “Hate Has No Home Here” signs are filled with people who state that they support everyone regardless of their race, gender identity, religion, socioeconomic status, etc. However, they do not support anyone who has a different opinion or viewpoint, or anyone that belongs to a political party other than the Democratic party.

The flyer announcing the event (see below) stated that a variety of performances would take place from noon to 4 p.m. on the streets of downtown West Chester. 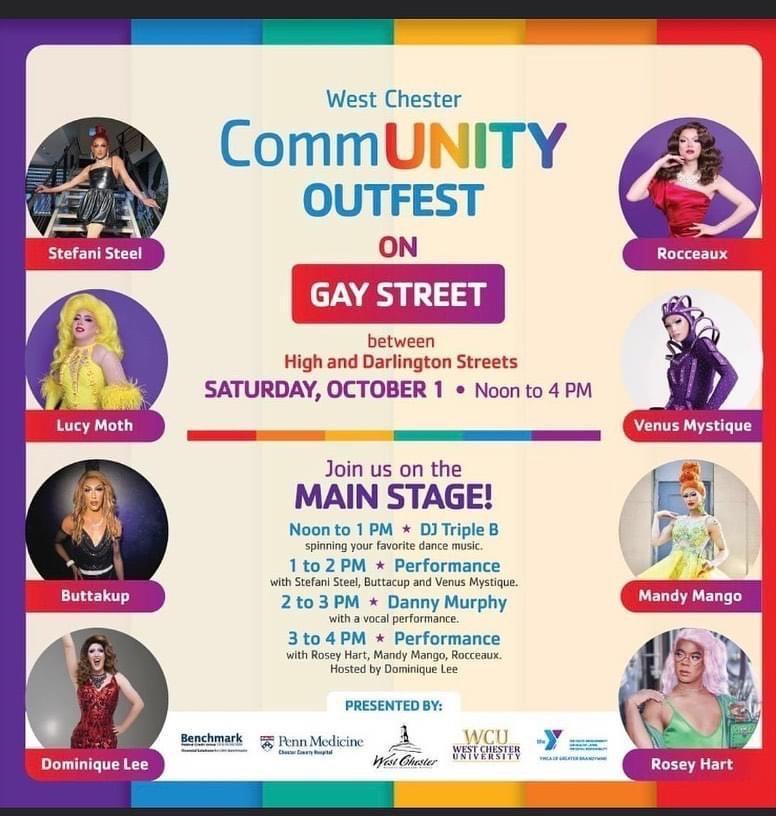 One of the performers, a queen named Stephani Steel, refers to themself on their Instagram account as a “Northern East Coast Whore.”

These articles demonstrate the diverse opinions on the matter that are not limited to the West Chester community. Clearly, there is not a consensus on the appropriateness of drag queens for children. Even the Washington Post article correctly stated, “Nobody is forcing any parent to take their child to a Drag Queen Story Hour.”

But it stands to reason that a drag queen show in the middle of the day in public might raise some questions. Therefore, the West Chester BID and Borough Council should have anticipated that there could be concerns, and when those concerns were expressed, they should have responded appropriately by answering questions and possibly modifying the event.

Many parents expressed their concerns to me about the performance on the streets on a Saturday afternoon. I read several of their emails, and they were all appropriate and respectful. As a West Chester resident, I suggested that the Council consider moving the drag queen performance to an inside venue during the evening. My suggestion was not even considered or commented upon, other than to state that drag queens are appropriate.

Furthermore, the Borough Council President, Mike Stefano, also a teacher in a local public school district, stated that he received a myriad of hate-filled and vitriolic messages that led to the cancellation of the event. He was interviewed on 6ABC, and interestingly, when ABC shared the screen shot of Stephani Steel’s Instagram page, they saw fit to black out the word “whore.”

The extent of the vitriolic messages received remains to be seen, but a recently filed Right to Know Request will provide the answers in a few weeks. In the meantime, the BID stated that the hate-filled messages were only part of the reason for the cancellation. At least one major sponsor rescinded after the announcement of the drag queen performance, and apparently the event did not have enough volunteers.

Could it be that the real reason for the cancellation rested on the overall lack of support, and the “hate-filled” messages were simply an easy target? Was blaming the cancellation of an event on community members who asked questions and expressed concerns just another example of political theatre in Chester County?

The real issue in West Chester is not the intolerance of a few parents who are concerned about their children being exposed to inappropriate content in the middle of the day. The problem is rooted in the vitriol that extreme progressives claim everyone else spews.

While the Council complained of hate-filled messages that were not quantified, they never received threatening messages before the event’s cancellation. It was only after the announcement of the cancellation, rather, that several individuals, and the West Chester Republican Committee, received a large number of hate-filled messages and posts including threats that were reported to the police. There were no hateful posts against the event, and no one suggested canceling it, rather, they encouraged residents to exercise their first amendment rights if they had concerns about the event.

Following these threats, Council President Stefano issued a statement on the Borough website asking residents to refrain from threats and hateful comments. However, during the Borough Council meeting prior to the threats being made, six out of seven Borough Council members and the Mayor chastised the community for hatred and vowed to bring a larger event to town. Their statements may very well have contributed to the threats and nasty posts about those questioning the event.

The Borough Council took no responsibility for their comments or potential relationship to the threats.

This is yet another example of political theatre orchestrated by the 100% Democratic Borough Council and Mayor… They continue to press the narrative that those who don’t align with their beliefs are hateful people.

Subsequently, Democratic County Commissioner Josh Maxwell jumped on the bandwagon, expressing disappointment of the cancellation, while never acknowledging the concerns about the daytime event or the threats aimed at members of his constituency.

After the cancellation announcement, Commissioner Maxwell, some members of Borough Council, and the Mayor planned a modified event with a rally and “family-friendly” drag queen show at a local bar that was held on Oct. 1. Why couldn’t this compromise be reached earlier when concerns were raised? This is clearly a better option more residents are comfortable with. Most were not demanding that the event be canceled — they simply asked for a modification. This new event represents what the concerned residents requested.

Why didn’t the BID and Council announce the revised event as a compromise to celebrate the LBGTQ+ community and respect the concerns voiced? The reason is simple: they were not ultimately concerned about the event or its cancellation. This is yet another example of political theatre orchestrated by the 100% Democratic Borough Council and Mayor, in conjunction with the BID. They continue to press the narrative that those who don’t align with their beliefs are hateful people.

The group who received the vast majority of vitriol and actual threats were those who asked questions and raised concerns. Once again, those who claim to support all people really only support those who agree with them. Those who continue to post their “Hate Has No Home Here” signs should look in the mirror before pointing at those around them.

It is well past time for our Democratic elected officials to stop playing party politics and represent all the constituents in their region.

Beth Ann Rosica holds a Ph.D. in Education and has dedicated her career advocating on behalf of underserved children and families. She owns a consulting business and is a mother to two children in the West Chester Area School District.

4 thoughts on “Beth Ann Rosica: Where does hate really live?”