Penn State University may claim to have a commitment to viewpoint diversity, but the actions of the university and its faculty appear to prove otherwise.
By Gabe Kaminsky

Indignation erupted immediately. The college swiftly deleted the tweet. And in an attempt to both quell the growing backlash and pretend to remain committed to diversity, Penn State issued a statement claiming the retraction “had nothing to do with the line about conservative students.” Instead, they said that the tweet was “an outdated statement” that “resulted in anger and confusion” while simultaneously maintaining that “Penn State seeks to be a marketplace of ideas and values different perspectives and viewpoints, including those on the left and the right.”

The reality: Pennsylvania’s flagship publicly-funded university removed the message after a backlash from left-wing Twitter accounts and students. A reporter for Penn State’s student newspaper went so far as to say that the “experiences of conservative students and students of color cannot be presented as equal in any way.”

The university clung to the notion that it “seeks to be a marketplace of ideas,” but, evidently, their willingness to seek out that ideal cannot withstand left-wing scolds intolerant of conservative students having a recognized voice. It would seem that their welcome to conservative students is not the only outdated statement to have come from the university last July.

The university clung to the notion that it ‘seeks to be a marketplace of ideas,’ but, evidently, their willingness to seek out that ideal cannot withstand left-wing scolds intolerant of conservative students having a recognized voice.

And, unfortunately, this problem is not relegated to University Park, Pennsylvania. Research shows that conservative student self-censorship is endemic on campuses, including publicly-funded ones like Penn State.

‘Ran Us in Circles’

Seeking to give the university another chance to explain its stance on viewpoint diversity, I reached out to Penn State with two questions:

Wyatt DuBois, a university spokesman, declined to comment and instead pointed to the statement from the summer.

“We have nothing more to add at this time,” DuBois said.

Matthew Soska, a sophomore from Langhorne who was recently elected Vice President of the College Republicans, said DuBois is “avoiding the questions, because they are not protecting a diversity of thought on campus.”

Soska was not alone in sharing his discontent with the academic and social climate on Pennsylvania’s publicly-funded campuses.

Aidan Mattis, who graduated from Penn State in May 2020, was the Vice President of the conservative Turning Point USA chapter on campus, in addition to holding leadership positions in College Republicans and Young Americans for Liberty. Mattis detailed how the Penn State administration essentially blocked YAL from bringing commentator Dave Rubin to campus.

“The school just ran us in circles,” Mattis said, “basically trying to change up contracts and they wouldn’t communicate directly with his team. They dragged out the process.”

“We haven’t had any speakers, and if we have they have been on private zoom meetings,” said Soska.

Mattis went on to describe an incident in a sociology class in which his professor, Dr. Sam Richards, referred to him as a “menace” for thinking free speech zones are “tyrannical,” as opposed to just permitting free exchange everywhere on campus.

I spoke with Richards, who said he does not believe there should be broad free speech on the college campus. Penn State “should have the right to designate certain places as safe spaces,” Richards said.

Stanley Kurtz, a senior fellow at the Ethics and Public Policy Center, disagreed.  “Authentic liberal education exposes students to a wide range of viewpoints and gives them the tools to identify and grapple with the strengths and weaknesses of each perspective,” he said.

“Sadly, too many campuses today silence, omit, or pre-emptively condemn viewpoints on one side of the political spectrum,” Kurtz continued. “Some even erect barriers to the free flow of ideas, like so-called safe spaces. All this is the antithesis of liberal education, and a betrayal of students, whatever their point of view.”

Mattis’s experiences of censorship, public shaming, and hostility from the university did not end with sharp criticism from professors. The recent graduate said that when the school newspaper published a piece on a free speech bill he put forth in student government, the publication ran his editorial under a picture of white supremacist Richard Spencer. Below are messages between Mattis and an editor, who attributed the controversial image to a “mixup between our photo and news staff.”

“You have pictures that were scheduled and taken for that article about my bill. Your choice to use a picture of Richard Spencer is just short of slander, and I want it changed,” Mattis wrote to The Daily Collegian. “My bill has nothing to do with him, nor do I share any of his ideals. This is disgraceful.” 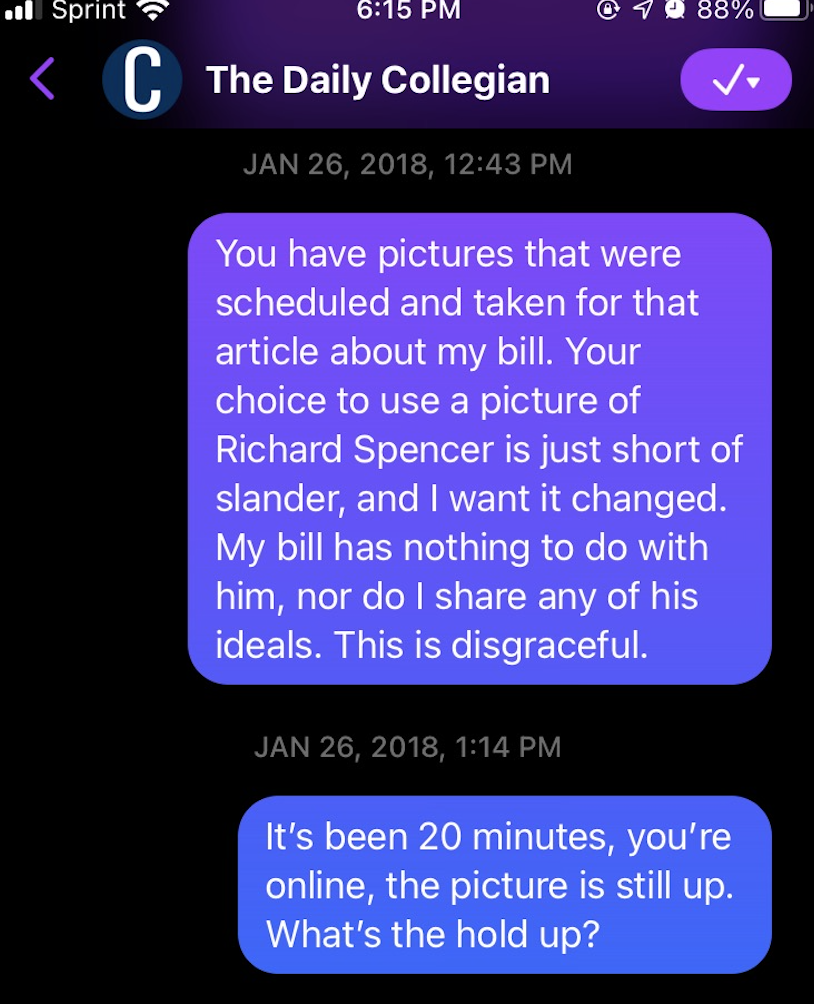 “We apologize for the mixup,” the digital managing editor wrote. “Unfortunately, there was a miscommunication between our photo and news staff. The story has been updated to include your portrait. Thank you for letting me know. We will update our social as well. Best, Mark (Digital Managing Editor).” 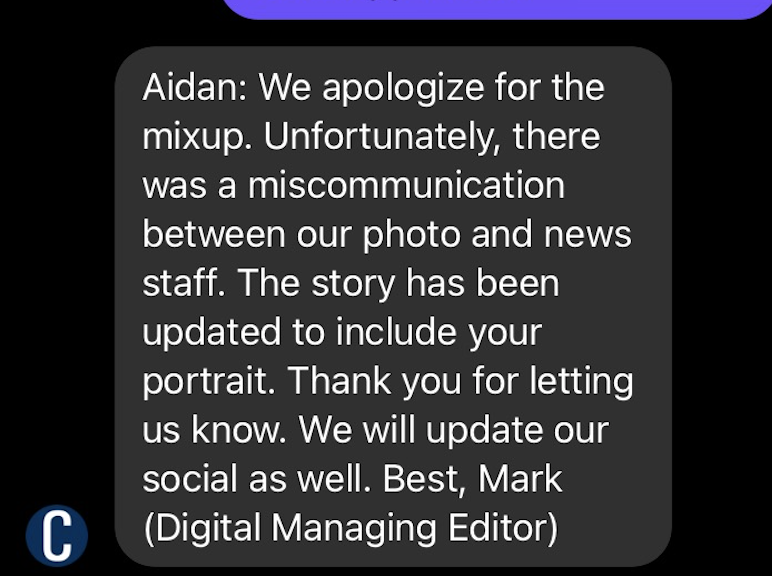 The Daily Collegian declined to comment on the incident.

“I’m not surprised that this happened,” Morgan Watt, a Penn State junior from Cambria County who is a member of the College Republicans said.

‘Swept This One Under The Rug’

The current chairman of Young America’s Foundation at Penn State, John Stafford, described another incident that gained national attention in January. A professor of Political Science, Pete Hatemi, emailed the college junior to say that YAF held “responsibility” for the Capitol riot on January 6th.

Prof. Hatemi wrote that “now might not be the time” for YAF to incorporate on the Penn State campus “given that many members of the Republican party supported an act of insurrection and violence” and “attempted to undermine a legitimate election outcome.”

After the professor’s criticism of Stafford and YAF, he wrote a near 12,000-word essay claiming he was “targeted by the alt-right,” that YAF has past and present support for “White Nationalistic, racist, anti-Semiti[sm] and hate speech,” and pondered if the student “knowingly chose to not disclose YAF’s history and nature.”

But Stafford noted, the negative attention did rally right-leaning students to his cause. “We tripled our membership during that time period,” he said.

“I feel like if there are professors who say stuff out of line, they’re not going to get reprimanded,” he continued. “A lot of students say he should be fired. In the same way that we [conservatives] need to start standing our ground a little bit. At the same time, [Hatemi’s actions] helped us and I’d rather him just be humiliated versus see him fired. It’s like a weird thing because we want to defend his right to say things, but you could make the argument it was slander.”

But Watt said that Hatemi “absolutely” should be punished for his actions. “If any other organization, besides a conservative organization, was in that predicament, the university would have handled it much differently. Penn State has swept this one under the rug.”

Nicki Neily, the president of Speech First and Parents Defending Education, noted that the campus speech environment has taken a decidedly leftwards turn.

“The window of acceptable discourse on today’s college campuses is very narrow — and moving increasingly leftward,” said Neily. “Students today credibly fear both disciplinary repercussions from university administrators, as well as social pressure — including threats, doxxing, and physical violence from their peers. As a result of this, students across the political spectrum refrain from discussing controversial issues at astonishing rates.”

‘The window of acceptable discourse on today’s college campuses is very narrow and moving increasingly leftward. Students credibly fear both disciplinary repercussions from university administrators, as well as social pressure from peers.’

Hatemi did not respond to a request for comment, and Penn State declined to comment on whether the professor faced any administrative repercussions for his attacks on an undergraduate.

The institution, which operates under a $7 billion budget heavily supported by taxpayer funds, still insists that it is working to create an environment where a marketplace of ideas can flourish — but the experiences of conservative students say otherwise.

Gabe Kaminsky is a senior at the University of Pittsburgh and an intern at The Federalist. His work has appeared in Fox News, the Daily Wire, the Washington Examiner, The American Conservative, and other outlets. @Gabe__Kaminsky / gkaminskycontact@gmail.com.

7 thoughts on “Gabe Kaminsky: Are conservative students welcome at publicly-funded Penn State University? Many say no.”